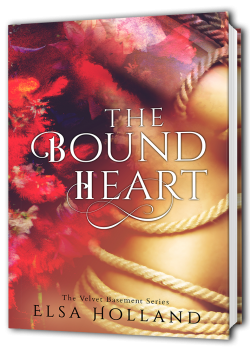 Every weekend, a group of us sign up at My Sexy Saturday and some of us at The Nuthouse Scribblers blog and post a sexy snippet: 7 sentences from a work in progress. Here’s mine for the week from  The Bound Heart. Probably the darkest of the stories in the series.

Olive has been waiting for the Bookbinder to make a move for years ( yes we are talking about a very disciplined man). He finally lets a little of that bound up control loose and has a taste, then avoids her. He’s determined that it’s the right thing to do for her but more importantly there is something about her that his instinct feels could unravel him…totally. She has turned up at his house late at night having fought indecision about knocking on his door for a few hours. Inside she pushes him until some of his control breaks. They are both off kilter and inevitably it ends up being a disastrous encounter. This snippet is as things start to heat up.

Jamie reared back on his hunches, grabbed the cushions and pulled off the silk cords stitched around the edges.

Tonight not even the warnings he had for himself would stop him; no she had pushed, he had fallen and they would see this through. There was no stopping, no good intentions now, just her and this stubborn ache that clenched in his gut in rhythmic pulses that said – take her, take her.

With the cords in his hands he looked at Olive, her eyes were glassy, the lids already droopy, her mouth shiny from his kiss. Seeing her like this, laid out with the embers of lust curling out of her, sent a shot of want deep into his groin. The taste he’d take tonight, the one he’d needed for four years now, it wouldn’t be as soft and pretty as their last.

“Give me your hands Olive.”

Link to My Sexy Saturday: www.mysexysaturday.blogspot.com